In a career spanning more than four decades, the Los Angeles–based artist Charles Gaines has become known for his conceptually rigorous and formally compelling explorations of the relationships between aesthetics, systems, and cognition. In his early conceptual projects, Gaines employed rules-based procedures to generate series of works composed of multiple panels. Often combining photography with drawing, he turned to the grid as a foundation, producing drawings that are notable for their meticulous, labor-intensive rendering of numbers and lines. Moreover, Gaines’s artistic output has been greatly influenced by the composer and artist John Cage’s use of chance and indeterminacy; the repetitive, minimal compositions of Steve Reich; and his own background as a jazz percussionist.

In recent years Gaines has examined the relationship between music, politics, and speech. Librettos: Manuel de Falla / Stokely Carmichael is the first set of works in a new series in which he continues his exploration of systems, using musical composition and notation as an organizing structure. Whereas repetition and accumulation are critical to his earlier bodies of work, Librettos layers two distinct sources, allowing unexpected connections to emerge. Manuel de Falla / Stokely Carmichael brings together the score of a 1904 opera—La vida breve (Life is short) by the Spanish composer Manuel de Falla, which tells of a love affair doomed by social mores and class differences—and a 1967 speech delivered in Seattle by Stokely Carmichael, in which the civil rights activist and Black Panther Party member argued that African Americans should not serve in the Vietnam War.

In earlier works, Gaines combined photography and drawing to closely evaluate how familiar objects—trees, plants, the human body, and the written word—are represented. Photographic imagery is transposed by hand onto gridded paper, the outlines of the subject often rendered using sequential numbers rather than a simple line. In Librettos, as in his recent series Manifestos (2008–) and Notes on Social Justice (2012–), text replaces numbers as the measure of process and duration. The Carmichael speech, which advocates the right to dignity and self-determination in the face of oppression, functions as the libretto (or lyrical text) for the opera, which was originally written in both French and Spanish. The tragic opera details the secret relationship between the wealthy Paco and a lower-class woman, Salud. After a confrontation at her lover’s wedding to a woman of his social class, the heartbroken Salud suddenly dies. Pairing the opera with Carmichael’s speech—which has a certain musicality because of the skilled orator’s use of repetition—reveals affinities between these seemingly disparate sources. The unexpected combination of music and text foregrounds the universality of class and racial struggles. Carmichael argues that the continued oppression of African Americans is rooted in economic and educational inequality, while de Falla’s opera serves as a cautionary tale about the polarizing social implications of class distinctions. Librettos: Manuel de Falla / Stokely Carmichael reveals the political content of an artwork that is more than a century old while inserting Carmichael’s speech into another form so that viewers can consider his words anew. 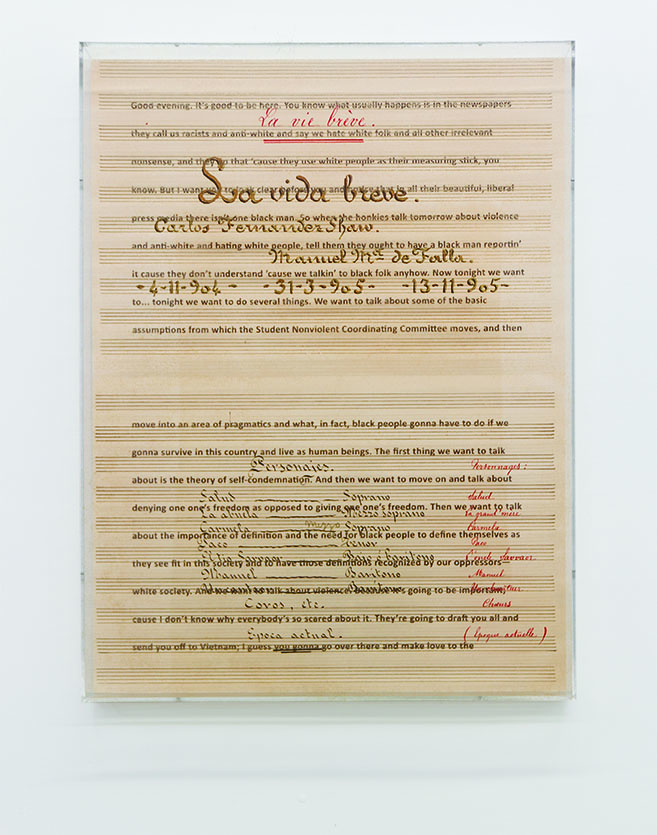