NJIDEKA AKUNYILI CROSBY: THE BEAUTYFUL ONES AND TWO FILMS BY AKOSUA ADOMA OWUSU

The Beautyful Ones is the first Los Angeles solo exhibition devoted to the work of the painter Njideka Akunyili Crosby (b. 1983, Enugu, Nigeria). The exhibition presents a new body of work in which she considers the potential dislocation of identity after expatriation, simultaneously reflecting on her Nigerian heritage and traditions, contemporary postcolonial African cosmopolitanism, and her experiences in the United States, where she has lived since 1999.

The tension between these varied influences plays out formally in her complex large-scale mixed-media works, which combine collage, drawing, painting, and printmaking. Her works challenge conventions of portraiture, even as they filter a number of art historical and literary influences. She makes extensive use of Xerox transfer printing, a largely Western technique, to incorporate found photography into the works: family photographs; images from Nigerian popular culture; clippings from political, fashion, and society magazines; and ornamental patterns from traditional textiles. These densely layered images cover most of the surfaces of her large-scale paintings: the walls, furniture, and floors of the interiors and the clothing and skin of the figures. Her intimate depictions of domestic spaces and everyday life also provide an important counternarrative to the often troubled representation of Africa’s complex political and social conditions in the media and in the public imagination.

Often appearing as the subject of her paintings, Akunyili Crosby is shown amid family gatherings, in contemplation, or in private moments with her husband. These new works represent a departure from the earlier paintings shown concurrently at the Hammer Museum that primarily focus on the figure. Their more expansive compositions allow the viewer to ponder architectural elements or the unusual collections of objects that she has rendered—a blue plastic doll imported from Ghana, an arched doorway and television set, an assortment of framed photographs, an empty balcony, oil lanterns on a tabletop—which serve to represent absence and quietude in her otherwise densely textured works. In these paintings, she has also introduced a new element that adds another layer of personal reference: commemorative fabric, also known as portrait cloth, with images of her family members. The cloth, similar to kente cloth in appearance, is ornate, with colorful patterns and portraits, and is produced to mark a special event. For instance, in I See You in My Eyes (2015), she incorporates portrait cloth from her brother’s wedding and her mother’s run for political office. While its use is widespread throughout the African continent, she notes that the wax pattern fabric is of European origin. While the addition of portraits to these Dutch made patterns relocate the textiles in an African milieu, the cross-cultural combination tacitly references the after effects of Africa’s tenuous history of colonialism.

The emphasis in Akunyili Crosby’s work on retaining a sense of self and tradition after immigration seems particularly topical in an international city such as Los Angeles, where the artist currently lives and works. Her paintings are unified by their technical rigor and the confidence of their subjects. The title of this exhibition, The Beautyful Ones, is borrowed from an ongoing series of paintings of the artist as a young child. Staring out of the picture plane directly at the viewer, she stands with her legs hip width apart, wearing grown-up-looking pointed-toe pumps. The history of painted portraiture, particularly of women, is replete with demure subjects who, rarely, if ever, confront the viewer. Even when depicted looking away or in partial view, Akunyili Crosby fully commands the viewer’s gaze, insisting that her position as a contemporary woman, whose sense of place is divided between continents, is both deeply personal and an increasingly commonplace social archetype that deserves visibility. While her visual sensibility recalls the work of the American artists Romare Bearden, Richard Yarde, and Mickalene Thomas, whose two-dimensional works are heavily textured through their use of color and pattern, Akunyili Crosby casts off in a singular direction, fusing African, European, and American influences and creative traditions while pondering the personal effects of living in an increasingly global, hybridized society.

Concurrent with Njideka Akunyili Crosby: The Beautyful Ones is Two Films by Akosua Adoma Owusu in Art + Practice’s project room. The presentation will include the award-winning Kwaku Ananse (2013) and the experimental short Intermittent Delight (2007).

The Hammer Museum at Art + Practice is a Public Engagement Partnership supported by a grant from The James Irvine Foundation. 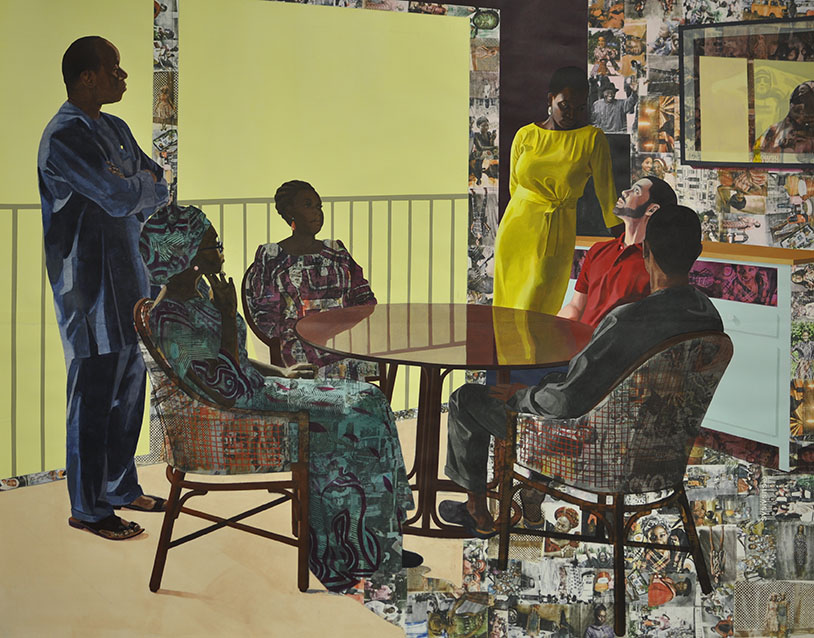 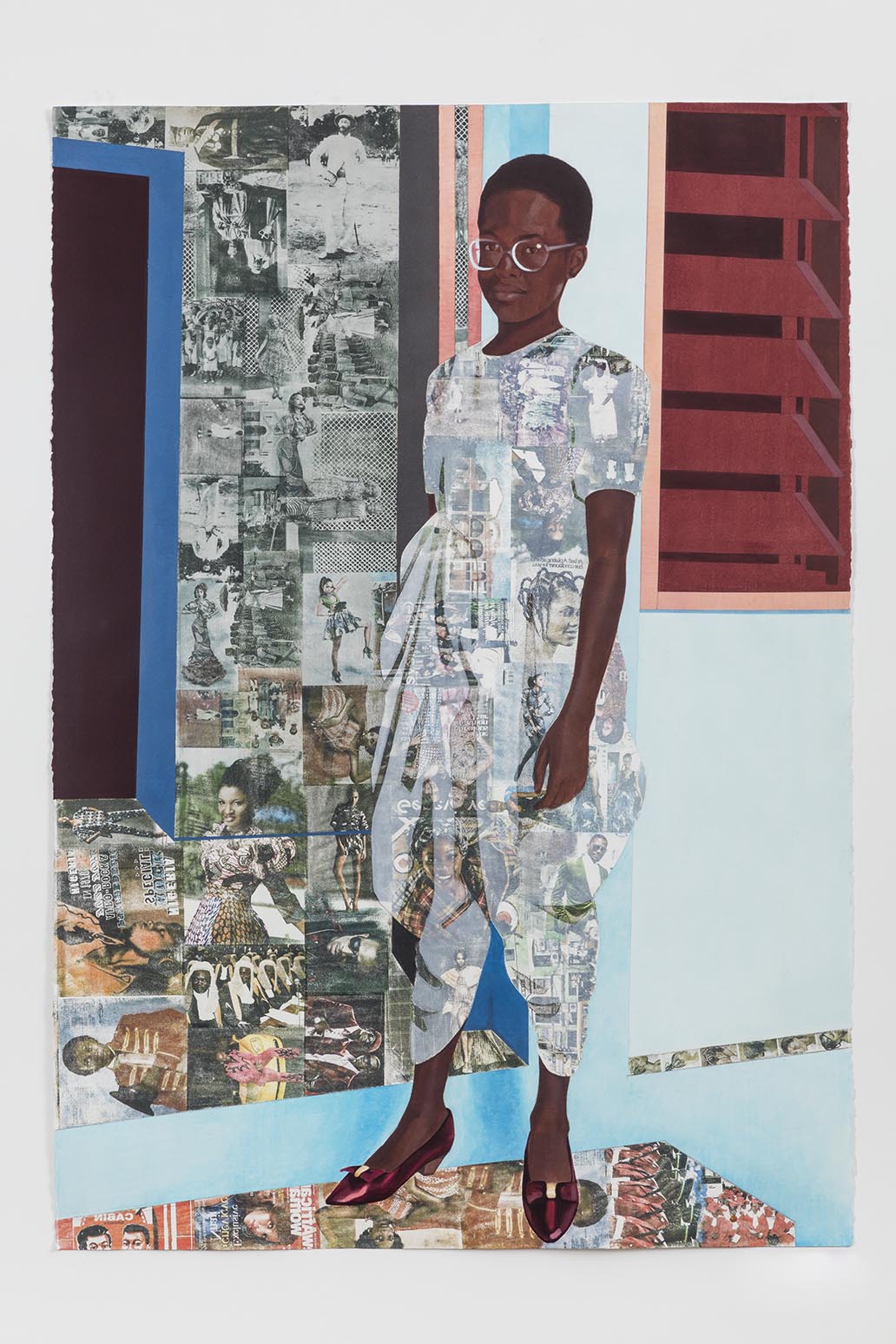 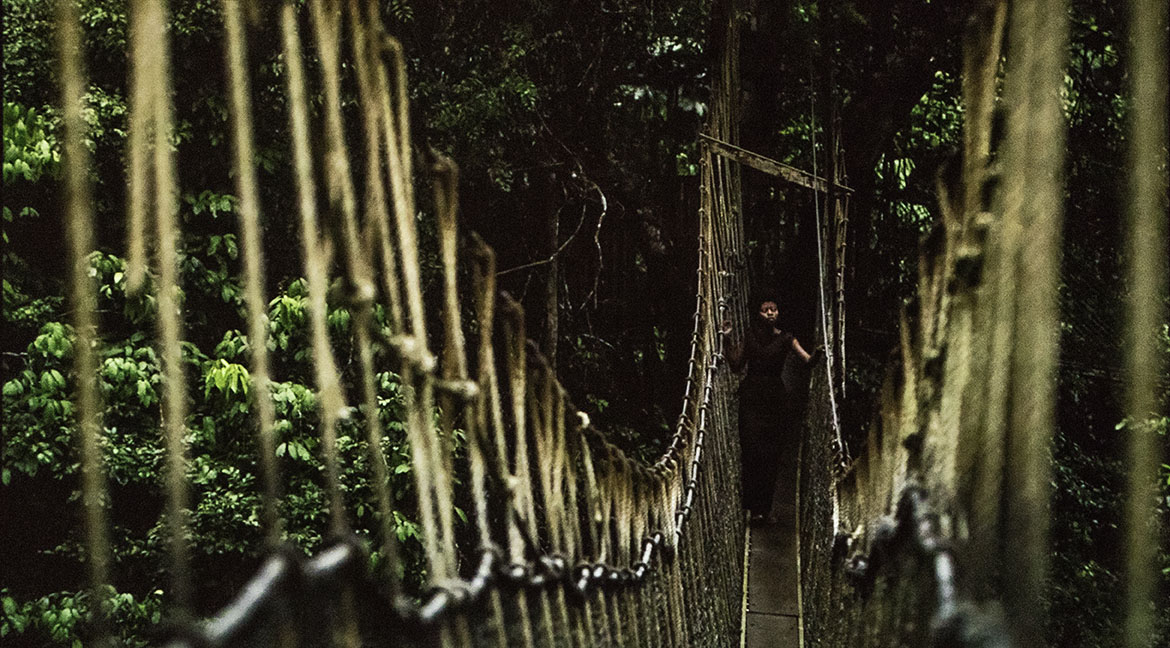 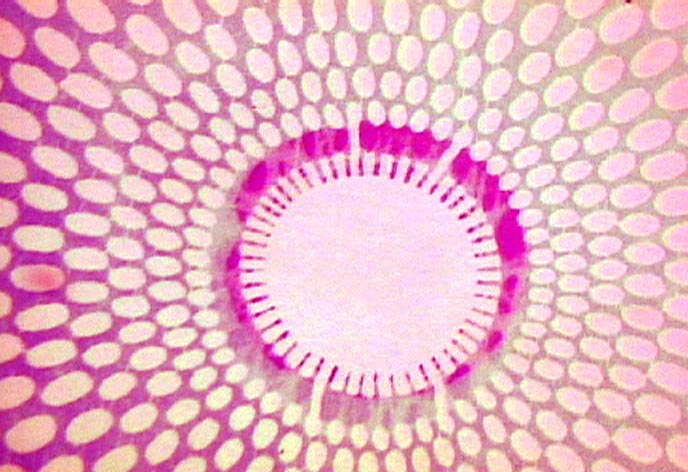 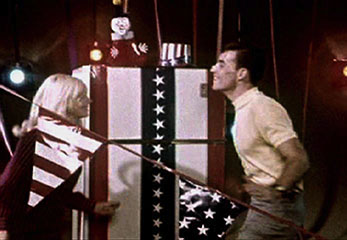 Njideka Akunyili Crosby, The Beautyful Ones no.1, 2015. Acrylic, pastel, colored pencils, and Xerox transfers on paper. 60 x 42 inches. Courtesy of the artist and Victoria Miro, London. Photo by Jason Wyche.